Lets make 2019 the year we Stop Adani!Getting involved is as easy as showing up to our next organising meeting at the Mackay Conservation Group office at 5.30pm Thursday the 7th of February.Join the Mackay Stop Adani team today to get involved with our rapidly growing campaign team of writers, event organisers, stall holders, campaign coordinators, social media warriors, community campaigners and dedicated volunteers. Can't make the meeting? Sign up to join the campaign here and one of our organisers will call you.

Lets make 2019 the year we Stop Adani!Getting involved is as easy as showing up to our next organising meeting at the Mackay Conservation Group office at 6pm Thursday the 17th of January. You can RSVP Now! This is your opportunity to get involved with our rapidly growing campaign team of writers, event organisers, stall holders, campaign coordinators, social media warriors, community campaigners and dedicated  volunteers. Can't make the meeting? Sign up for the campaign here and one of our organisers will contact you.

Adani in court today for breaching their ‘special’ pollution licence

Mackay Conservation Group released polling today that shows the majority of Central and North Queensland voters want government subsidies for Adani withdrawn. The group delivered a letter to local MP, Julieanne Gilbert, calling on the Queensland Government to cancel what amounts to nearly $500 million in subsidies.

Peter McCallum, Co-ordinator of Mackay Conservation Group said, “It’s disturbing that governments trust Adani to push ahead with a mine at a time when they’re being prosecuted in court for polluting the Great Barrier Reef with coal.

“Last year the Queensland government granted Adani a favour and issued a special licence to allow them to pour coal-laden water into one of the world’s greatest natural assets, the Great Barrier Reef, and Adani failed to even comply with that.

“The polling of voters in Townsville, Rockhampton and Mackay reveals more that 60.0% of respondents strongly oppose the Queensland government giving Adani special deals, which allow the company to avoid paying a reported $370 million in royalties and offers Adani a $100 million publicly-funded road upgrade and a licence to take unlimited water for 60 years. 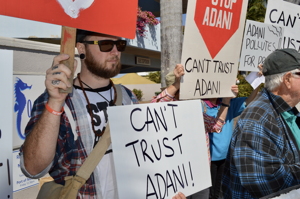 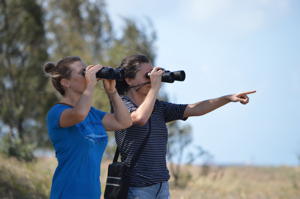