Abbot Point - a disaster in the making 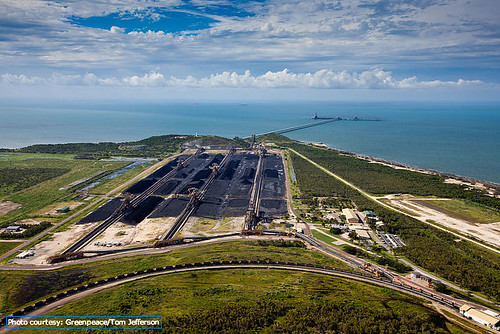 The already huge coal port at Abbot Point north of Bowen in Queensland, and adjacent to the Great Barrier Reef, could increase in size and impact by as much as 5 times if proposed expansion plans go ahead.

If the proposed expansion of the Abbot Point coal port terminals goes ahead, Australia will be responsible for exporting massive amounts of greenhouse gas producing coal, and put at risk our much-loved Great Barrier Reef, and the turtles, fish, dugongs, whales, dolphins, coral and other species that depend on it.

Such an outcome would not only risk a national ecological disaster, it could put at risk tens of thousands of jobs in the marine tourism industry in Queensland.

This proposal for dredging within Abbot Point port boundaries and dumping of the spoil outside port boundaries in GBR Marine Park waters off Holbourne Island national Park, Nares Rock fishing grounds and the Catalina war grave was approved both by the Australian Environment Minister, Greg Hunt and GBRMPA. There will be 3 million cubic metres (i.e. 4.5 million tonnes) dumped over three years. The Australian Minister set over 90 conditions on the action and GBRMPA set 46 conditions, Many of these were related to the opposition and concerns the environment, tourism and fishing sectors had about the action. GBRMPA staff opposed the site approved by the Australian Minister and wanted alternative sites father away from Holbourne Island and the other “sensitive receptors” and their permit conditions strongly reflected that.

It appears one of the alternative sites may be the final selection. The decisions sets a poor precedent for future large scale dumping of dredge spoil outside of coal port borders in the GBR. That included 15 million cubic meters of spoil if the Dudgeon Point coal terminals just north of Hay Point are approved. Still unknown is how far the dredge spoil plumes will actually go and where.  The decisions were made in spite of thousands of objections registered with the Australian government and GBRMPA. GBRMPA was under strong political pressure to give an approval once the Australian Minister approved the site off Abbot Point. One condition is 5 years of monitoring following the dumping to provide much needed data on the impacts of the dumping on marine life and recovery.  The decision also opens up the Galilee basin and the region between the port and this coal basin to massive coal and gas development if demand ever recovers.

What is Abbot Point?

Right now, Abbot Point has one major coal terminal, stretching some 2 kilometres out to sea.

What’s most alarming is that North Queensland Bulk Ports (NQBP), a Queensland government-owned corporation and the owner of the existing port wants to see it massively expanded.

A further 5 coal terminals are proposed for Abbot Point alone (11  in total for the Queensland coast), along with two rail lines to Abbot Point through sensitive ecological and indigenous cultural areas from the proposed Galilee Basin coal mines as well as some of the Bowen Basin Coal Mines.

If these new terminals go ahead, the largest coal port in the world with an export capacity of 250 million tonnes per annum (Mtpa) will be located on the edge of the World Heritage Great Barrier Reef.

These wetlands are recognised as internationally significant as they provide habitat for more than 40,000 birds during the Wet Season.

They contain at least  211species of birds at least  3of which are listed as threatened.  They provide the largest habitat known in Australia for the vulnerable Australian Painted Snipe.

This habitat would be disturbed by a proposed coal conveyor belt for the AP-X coal terminals’ project.

Tonnes of hazardous coal dust from the rail and loading operations and coal stockpiles will inevitably be blown onto the wetlands threatening the wildlife food chain.

There is no final Environmental Management Plan with funding or staffing to protect these wetlands and we continue to lobby for one.

24 hour lighting and noise are known dangers for nesting turtles, diverting them from their purpose. Any baby turtles hatched are drawn to light, which means that instead of achieving the relative safety of the water by following the moonlight, they will likely head towards the dangerous coal port.

Turtle numbers have dropped since the establishment of the port and expansion is likely to hasten the process.

The overall expansion of shipping out of Abbot Point and other proposed coal ports will massively increase the risk of accidents on the reef.

Projections are that transits through the Great Barrier Reef will increase from the current level of 14,000 to around 80,000 per annum, much of that driven by coal mining.

That increases by 5 times the risk of serious shipping accidents like the Shen Neng 1 in 2010, which released 4 tonnes of fuel into the water and damaged 3 km of reef.

Coal shipping has a deeper draft and requires more dredging than other cargo ships, and the larger ships will require even deeper dredging.

At present shipping transits from Abbot Point total around 170 a year in the smaller Panamax class sized vessels.  If the proposed mines and expansions proceed it would mean an increase of some 25 times the current number of shipping movements.

The construction of the coal ports is said to require employment of some 1,500 people, and produce another 300 ongoing jobs.

Yet the tourism industry associated with the Great Barrier Reef employs some 65,000 people and generates close to $6 billion a year.

It seems absurd to put a small number of mining jobs ahead of a major industry like tourism, which is what irreparable damage to the reef as a result of coal mining could do.

Increased royalties from coal expansions for at most a few decades will not outweigh the irreparable loss of future long-term income to Queensland from a healthy sustainable tourism Great Barrier Reef industry.

The Australian Environment Minister will decide in December 2013 whether or not to permit the dumping of this dredge spoil outside the port boundary in the Great Barrier Reef.

Dredging involves digging up the seabed and rocks, destroying the sea grasses and the habitats of bottom dwelling benthic marine animals. This affects the fish, molluscs and other sensitive creatures like turtles and dugongs that depend on them.

These sediments can drift for kilometres, degrade water quality and cover seagrass beds and coral.

Modelling has shown the dredge spoil plume, driven by deep ocean currents, could travel north of the Burdekin River mouth and south to the Whitsundays.

More dredge spoil would be dumped over time in the dumping site as maintenance dredging is carried out and if new terminals are developed.

It will give Australia the dubious honour of becoming the second largest exporter of greenhouse gases after China.

7. Existing coal ports are under utilised - so we don't need more

A report published in November 2013 by the Centre for Policy Development  entitled ‘Too Many Ports in a Storm’ has found that Queensland is currently only using 65 per cent of the capacity of its existing 15 ports and that capacity will be adequate until 2020.

Demand is already dropping for the lower quality thermal coal that the proposed expansions were based on, and excess capacity simply adds extra cost and inefficiencies to the industry.

8.Decline in demand for thermal coal

The coal in the Galilee Basin is largely lower-quality thermal coal of a quality no longer acceptable to many buyers (such as the Indian government) because of its high ash content.

It would have to be mixed with coal from elsewhere to get the ash content down and that would add to its cost. India’s currency has devalued which also makes thermal coal more expensive.

9.Damage to the Great Barrier Reef

The Great Barrier Reef is an Australian national treasure and one of the 7 wonders of the world.

At huge risk from global warming and climate change, and the crown of thorns starfish, the added damage caused by the expansion of coal ports along the Queensland coast adjacent to the Reef puts one of our greatest assets in even greater danger.