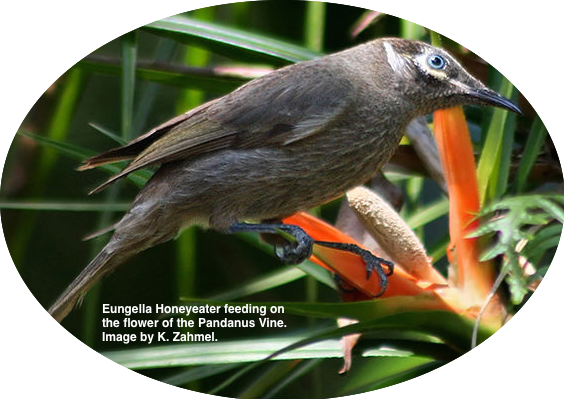 Mackay Conservation Group has partnered with Birdlife Australia, Birdlife Mackay and other volunteers for the past three winters, 2014-2016, to monitor the impacts of logging on the endemic Eungella Honeyeater and other honeyeaters in the state forests surrounding Eungella National Park west of Mackay in the Clarke Range.

For bird species with a population of 10,000 or less if the population shows a decline in three consecutive years of monitoring, it can be nominated under the Australian Environmental Protection and Biodiversity Conservation Act 1999 as a threatened species. That designation could give it increased protection from any threatening processes.

The Department of Agriculture, Fishing and Forestry (DAFF) approved the resumption of logging in the Cathu and Crediton State Forests in 2013 more than a decade after logging ceased. The Eungella Honeyeater is only found in the rainforest of Eungella National Park (http://www.nprsr.qld.gov.au/parks/eungella/) and surrounding state forest woodlands.

Along with other honeyeater species there, they play an important ecological role in keeping these forests healthy by eating lerps, (larvae of the psyllid insect with a high carbohydrate covering). They are also a pollinator of native tree and vine species as they take nectar from their flowers.

Birdlife Australia (http://www.birdlife.org.au/) helped us initially design and locate three 10 hectare monitoring sites in Crediton State Forest (http://www.nprsr.qld.gov.au/parks/crediton/) so we could gather data to see if logging was having an impact and if the population of this species is in decline. Monitoring also began in Cathu State Forest (http://www.nprsr.qld.gov.au/parks/cathu/) in 2015-2016. Birdlife Mackay volunteers conducted weekly surveys during winter months in Crediton State Forest in 2014 and 2015 and bi-weekly after that. Coordination of the surveys was by Darryl Barnes, President of Birdlife Mackay (http://www.birdlife.org.au/locations/birdlife-mackay). Analysis of data was undertaken by Mackay Conservation Group.

Earlier data from surveys conducted since 1998 recorded a dramatic drop from 60 to a current maximum of 10 birds per survey in 2007.  We found the most likely cause was a significant drop in the flowering density of the woodland trees. This was possibly due to a decrease in larger rainfall events since 1991. 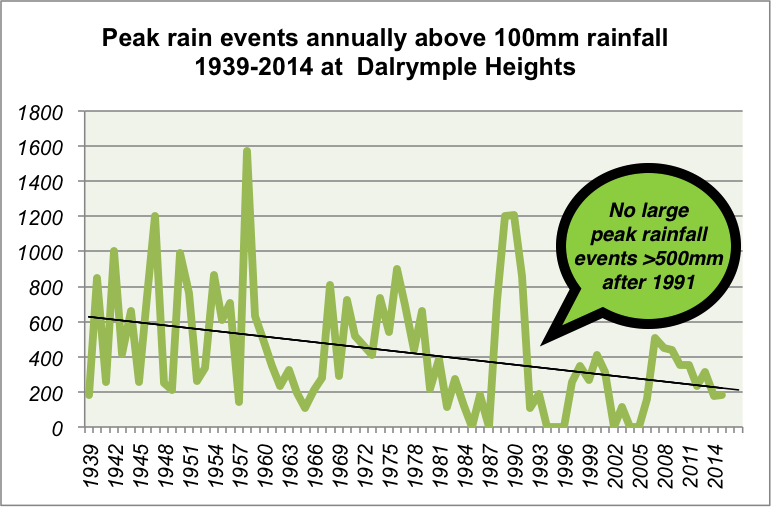 Two of our 2014-2016 monitoring plots were close to the current logging operations. Eungella Honeyeater numbers were much lower, ranging from zero to just a few per site near the logging sites, and significantly higher at the third monitoring plot which was well removed from the logging.

There was a strong linear correlation between numbers of Eungella Honeyeaters (EH) recorded through 2015 and tree density with none recorded once tree density falls below 10 per hectare. 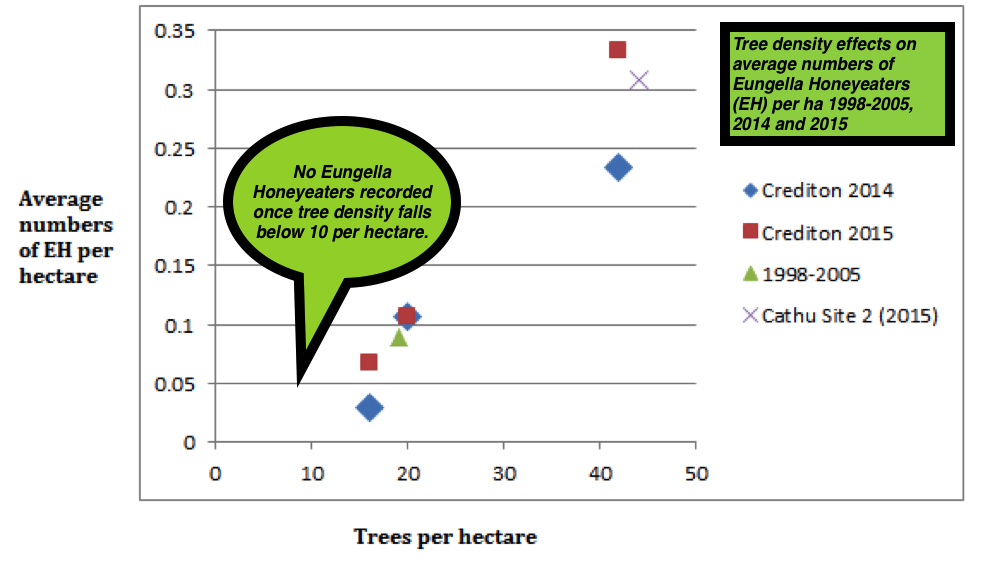 Continuing research is now needed to understand and quantify the economic as well as the environmental benefits of protecting the habitat of the Eungella Honeyeater because it attracts many bird-watching eco-tourists each year and is unique to our region. This species is also classified as at medium risk from climate change as it is only found at higher elevations and if temperatures continue to climb it eventually will run out of room to go higher.

This research was partially supported by grants from the Norman Wettenhall Foundation in 2014, and by Mackay Regional Council in 2015 and 2016.  More detailed information about our research activities can be obtained by contacting Patricia Julien on [email protected]

Help us continue our research by registering your donation now.