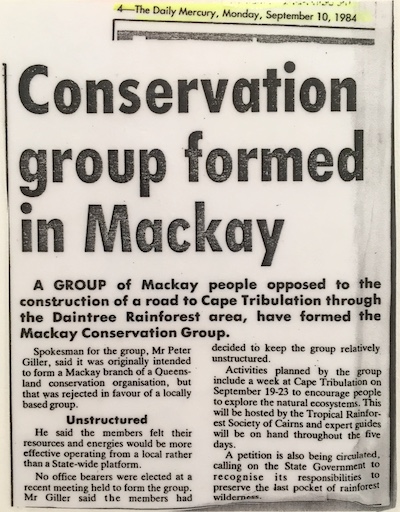 The Mackay Conservation Group (MCG) was established in 1984. At the time, the battle over the Bloomfield to Cape Tribulation road through the Daintree rainforest was in full swing, a battle that ultimately led to the World Heritage listing of the Cape Tribulation National Park. Members of the Mackay community were very concerned about this destruction and came together to form Mackay Conservation Group.

The preservation of the melaleuca forests at Slade Point on Harbour Board land was also of great concern, as were proposals to subdivide Lindeman Island for development.

The 1989 Qld state election which saw the 32 year reign of the National Party government brought to an end, members of the MCG were actively involved in creating and publishing a local score card on election candidates.

Over the years, other issues MCG has campaigned on include:

In 1993 MCG properties trust was able to buy the building in Wood Street, Mackay. This security of tenure has enabled the group to develop strong connection to the region.

MCG is a registered charity and has Deductible Gift Recipient status, which enables tax deductibility for donations.

MCG has more than 1,000 members and supporters.