Divestment Action - Westpac said No! Commbank now it's your turn

Posted by Azrae Hope 78pc on 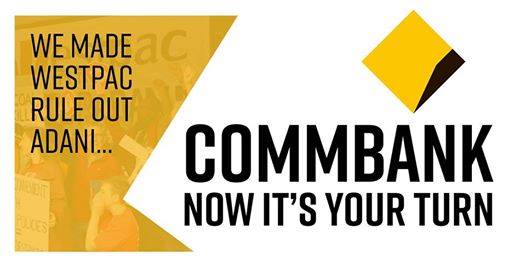 Together, our collective actions have pushed Westpac to rule out Adani. What a huge win! But now new evidence has been released that confirms Adani is banking with Commbank.

The new information exhumed confirms that Commonwealth Bank is the transactional bank for Adani. The big Four banks of Australia were thought to have ruled out funding Adani's mega mine, however Commonwealth Bank is now the only major Australian Bank which has not made a clear statement against financing the proposed project. The bank ended an advisory role to Adani several years ago, but they have never made a firm commitment against financing the mine.

The evidence shows that in March this year, Commbank was allowing the group to lay down the $1.6 million they required to obtain the water license for the project. Moving the project a step closer to going ahead.

It's time to push CommBank to follow suit of Westpac, and rule out funding for this destructive coal mine once and for all!

The divestment action will start at the Mackay City Westpac Branch to say a big congratulations to Westpac for standing on the right side of history and ruling out financing the Adani mega mine.

The rally will then march across the road to the CommBank branch to call on the bank to say no to Adani and remind them that they have the power to help protect the Great Barrier Reef and future generations by not investing in the infamous Adani Carmichael mega mine.

All are welcome at this action, and everything is family friendly.

For those of you that are free to come any earlier we will be meeting at the Environment Centre (156 Wood St) at 11:00am for a debriefing. This action is being organised by Mackay Conservation Group to help to spread the word from the movement to #StopAdani.

Hope to see you there!