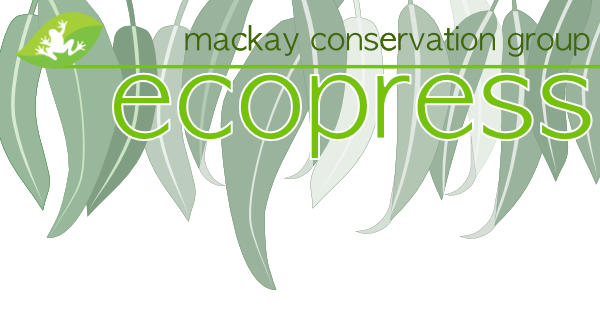 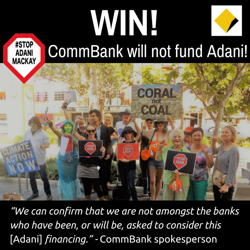 You asked for it and CommBank listened! Late today we learned that the Commonwealth Bank has now joined with our other big banks and ruled out funding the polluting Adani coal mine.

All four of Australia's Big Banks will not be funding Adani. It's time that our government takes the hint and stops giving hand outs to a company and project that is financially in-viable!

The Commonwealth Bank has indicated it will not lend money to Adani’s proposed Carmichael coalmine, leaving the project without financing from any of Australia’s big four banks. A spokesman from Commonwealth Bank said the bank is “not among the banks who have been, or will be, asked to consider this financing”. 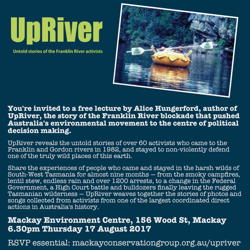 UpRiver - the story of the Franklin Blockade

You're invited to a free lecture by Alice Hungerford, author of UpRiver, the story of the Franklin River blockade that pushed Australia's environmental movement to the centre of political decision making.

UpRiver reveals the untold stories of over 60 activists who came to the Franklin and Gordon rivers in 1982, and stayed to non-violently defend one of the truly wild places of this earth.

Share the experiences of people who came and stayed in the harsh wilds of South-West Tasmania for almost nine months — from the smoky campfires, lentil stew, endless rain and over 1200 arrests, to a change in the Federal Government, a High Court battle and bulldozers finally leaving the rugged Tasmanian wilderness — UpRiver weaves together the stories of photos and songs collected from activists from one of the largest coordinated direct actions in Australia's history. 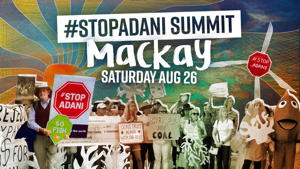 Stop Adani Summit Central Queensland
From Bowen to Mackay, our region is at the coalface of the Adani Mine. We need to let all levels of government know that we want long-term sustainable jobs - not another boom and bust disaster!

At the #StopAdani Summits we'll come together, connect on our shared values, learn about what's happening across the country, and plan for the next stage of the campaign here in Central Queensland. Come along to hear from inspiring speakers, get all the latest insight and get the tools you need to build power in your community to stop Adani. There'll be food, friendly faces and we'll round it off with a fun social event in the evening. So, are you in?

If cost is a barrier or you can't pay online, please get in touch and we can find a way for you to attend. You can reach Maggie at [email protected] 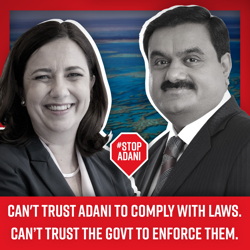 A $12,000 fine for Adani announced yesterday by the Queensland Government for polluting the Great Barrier Reef coast is inadequate and will encourage future environmental harm at Abbot Point rather than preventative action by the company. The Queensland Department of Environment and Heritage Protection has imposed a fine of $12,615 on the company after it admitted to releasing more than eight times its licenced concentration of pollution in March this year. The Department is yet to report on pollution of the Caley Valley wetlands.

It is hard to see how this fine can act as a deterrent. Adani made over $250 million in revenue at Abbot Point in the last financial year, with this fine representing a miniscule 0.005 percent. Adani is likely to make a business decision that it is cheaper to pollute the Caley Valley wetlands and the waters of the Great Barrier Reef than to put in place infrastructure that will ensure the sensitive environments at Abbot Point are never damaged again. Without sufficient penalties for breaching environmental conditions there’s little point in having them.

Adani is operating a coal terminal in a cyclone-prone area that cannot withstand a cyclone without risk of polluting the Reef and the Caley Valley Wetlands. We need much more than a fine to prevent future pollution if the port is destined to carry Adani’s dirty coal. The port’s wastewater management systems are clearly inadequate and sediments which appear to be laden with coal were seen within the Caley Valley Wetlands adjacent to Adani’s storm water system outlet.

Adani has been given free water, free coal and now almost free rein to pollute the environment and our precious Reef coast. The company can’t be trusted to operate anywhere in Queensland. 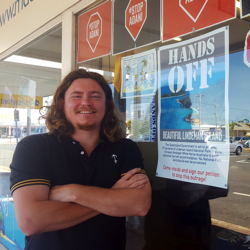 Mathew Bing is MCG's August Member of the Month! Although, Mat has only been an official member of the group for only one week, he has put his blood sweat and tears into MCG over the past year - Mathew your time, energy and commitment does not go unnoticed!

Mat started turning over a new leaf after enduring an on-going distaste with the current state of society, which sparked a strong desire for change. He soon became active with the local Green’s political party, which got him through the doors of our Environment Centre and he hasn’t looked back since.

From his epic public speaking and event facilitating abilities, to his on-going loyalty and support, we are beyond grateful to have Mat on-board as an active member of the MCG family. Congratulations Mat! 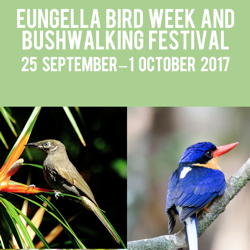 Come to Eungella and support the inaugural Bird and Bushwalking Week Festival west from Mackay. Join in the activities for a day or maybe stay for the week in a local B & B and enjoy the hospitality and the cool mountain air on offer, plus visit rainforest locations to search for the endemic Eungella Honeyeater along with other rainforest species that call this place home. Take one of the guided bush walks and see some of the breathtaking views and follow mountain streams as they meander through this tropical wonderland.

Wake to the Currawong and the Kookaburra as they welcome in each new day. You’ll be amazed at the complex array of bird calls as the early morning chorus cranks up and changes pitch and frequency by the second. You’ll be fascinated by the actions of a Noisy Pitta as it hops around the forest floor scratching through the ample supply of leaf litter. You’ll catch the glimpse of a yellow flash as a bird darts between the leafy branches before coming to rest on a bare limb with the morning sun highlighting a Regent Bowerbirds brilliant black and yellow attire. You’ll hear the screech of a King Parrot as it signals its arrival echoing through the clouded rainforest canopy. You’ll more than likely hear the distinct call of a Eungella Honeyeater before you get a sighting.

Marvel at a local artist at work and maybe pick up a few tips or participate in one of the afternoon workshops. Enjoy slide shows, power point presentations and admire artwork displays as you soak up the atmosphere of this unique experience.

There will be something for everyone to enjoy. www.wildmob.org/eungella-birdweek/ 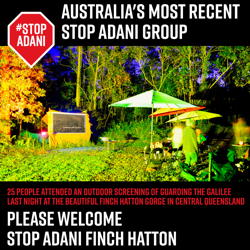 In the picturesque Finch Hatton Gorge on Wednesday evening around 25 residents got together to watch the film Guarding the Galilee and become better informed about the broad range of issues that the Adani mine presents to Queensland. From damage to waterways and underground aquifers, threats to farming operations to impacts on the health of the Great Barrier Reef, the film details stories told by North Queensland locals and people in India who have been fighting Adani for years.

After the film the group held a discussion and decided to form Stop Adani Finch Hatton. People everywhere want to protect our land, our water and our planet and they are doing everything they can to #StopAdani!

If you'd like to hold a screening of Guarding the Galilee in your area, contact Maggie at Mackay Conservation Group [email protected] 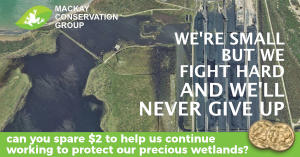 Can you help us continue our work?

Fighting multinational mining companies and developers who want to take away our national parks is hard work and it also costs money. Our work days extend late into the evening every day (well here I am typing a newsletter at 6.30pm on a Friday). It's a job we love doing but we need support to ensure that there are sufficient funds to run effective campaigns. If you can help with a donation of only $2, please go to mackayconservationgroup.org.au/donate.
Share
ecopress