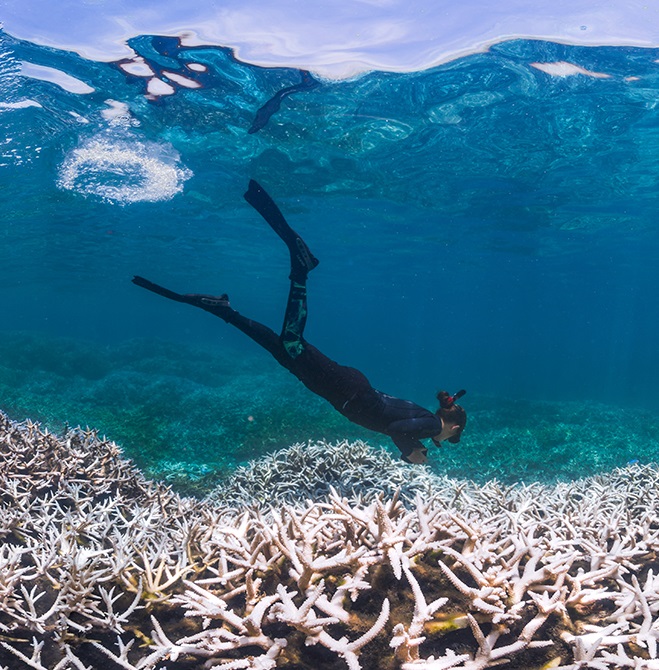 North of Cooktown, the reef extends over an area of nearly 80,000 sq km, which is bigger than Tasmania..  He also failed to mention that the entire reef from Gladstone north has been impacted by this coral bleaching event. This is a national crisis with international significance.

“If you were running a dive and snorkel operation north of Cooktown, your business would be facing a very rocky future.,” said Tony Fontes, spokesperson for the GBR Divers and Mackay Conservation Group Reef Campaigner.  “While the  most severe bleaching has occurred in the least visited section of the reef,  there are still a number of boat operators that have had to shift sites to move away from local bleaching.”

The main driver of coral bleaching is global warming.  The warmer than average water temperature causes the corals to stress and bleach.  If the temperature remains too high too long, the corals then die.  The main driver of global warming is the burning of fossil fuels, in particular, coal.  Much of the bleached coral in the northern section of the reef is expected to die.

“This is what global warming looks like. This is real and it is happening now and both the State and Federal government refuse to take immediate action,” said Mr. Fontes.  “This is what the mining and burning of coal is doing to our precious Reef. With their support of the coal industry, Mr. Hunt and his government are a big part of the problem.”

“We need to stop the mining and burning of coal and make a rapid transition to renewable energy.”