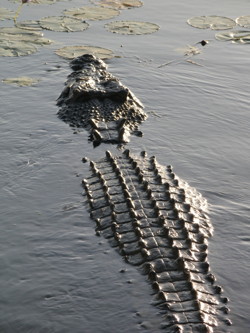 Conservationists will today call on a Queensland parliamentary committee to reject legislation that would reintroduce mass slaughter of wild crocodiles in the state.

Mackay Conservation Group coordinator, Peter McCallum, said that crocodiles do pose a threat to human life but the risk has been overblown.

Last year, Bob Katter, a federal MP, claimed that a person was killed by a crocodile every three months in North Queensland.

Conservationists have disputed that claim.

“Since 1985 there have been 11 fatal crocodile attacks in Queensland. That’s about one every three years,” Mr McCallum said.

“By comparison one Australian dies from complications of bee sting every six months.”

“It’s easy to drum up fear, even when the threat is minimal.”

“Mackay Conservation Group will be calling on the committee to reject fearmongering and rely on the clear scientific evidence when making its recommendation on the proposed law.”

From the 1940s to 1970s crocodiles were killed in large numbers, mostly by hunters hoping to cash in on high international prices for crocodile skin.

Saltwater crocodiles were pushed towards extinction in Australia until Queensland reluctantly enacted legislation to ban wild crocodile killing in 1974.

As late as 1988, saltwater crocodiles were listed as endangered.

Since then crocodile numbers have recovered to the point that they are no longer considered vulnerable to extinction.

On average 8 Queenslanders die each year in boating accidents.