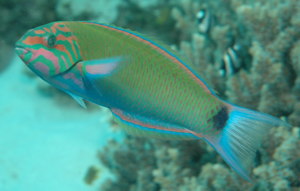 One of the great benefits of green zones is that they allow large herbivorous fishes to survive in abundance. Those fish consume algae that would otherwise dominate corals and other reef building species. In a 2006 experiment led by scientist Terry Hughes, large fish were excluded from reefs damaged by bleaching. Large cages were constructed in green zones that would allow small fish to enter but prevent the large ones coming in. Over a period of three years the reefs were dominated by seaweed up to three metres in length and the survival rate of corals declined significantly compared with areas control sites without cages.

This study provides clear evidence that green zones help the reef recover from coral bleaching. With the likelihood of increased bleaching due to global warming it is time we began to look more closely at the management of our marine ecosystems and whether we need more than the current 30% green zones in the Great Barrier Reef.