We’re lucky we live in a country where disputes are settled peacefully, through negotiation.  And we do still have the right to protest.  However, it’s becoming glaringly obvious that our “negotiation system” consistently favours the resource extractors, and when it doesn’t, the politicians get busy changing hard-fought-for laws so it does.  Land rights, water licences, environmental protection laws, they’ve all been changed to favour the extractors.

Bruce Currie, who you’ll see shortly, has a farm near the southern end of the mine site.  He was so concerned he travelled to India to see first-hand Adani’s operations, and in his words, I quote: “The company’s complete disregard for the environment and treatment of their nations citizens is barbaric”.

Not just depletion but the quality of water is at stake.  As increasingly large amounts are removed from the Basin, the water flow rate increases, resulting in more minerals and salts.  The water could become unusable.

Farmers have also not received adequate Make Good Agreements for if and when their bores are depleted.  Their concerns are not being adequately addressed by Government.  Farmers close to the mine site have been told to expect their bore levels to drop by around 20cm.  Since European settlement it’s been estimated that one third of all bores and springs in the Great Artesian Basin have already stopped flowing; and some bores have fallen as much as 80 meters.

The QLD government granted Adani a licence to draw billions of litres of free water from the Galilee Basin for 60 years, and Adani can increase the amount they take without reapplying for a new licence, which is something farmers have to do.  Start again from scratch.  A process that can be prohibitively expensive, and refused on environmental grounds, but not for Adani.  The question arises:  Are they going to provide the same free unlimited water to the additional 5 mines Canavan has now started talking about?

Minister for Coal, Matt Canavan justifies this development by the jobs it will create, but now the truth is out, that Adani will not provide 10,000 jobs, he’s saying “Adani and the 5 other mines”, will provide 15,000 jobs.  Sorry Canavan, but why should we believe your numbers this time?  Adani and you lied before, until you were made to tell the truth in a court of law.  Will these additional 5 mines also be getting free, unlimited water for 60 years?  How will existing mines compete?

Let’s not underestimate the importance of the natural springs, that have for time immemorial been the only reliable water source for our unique wildlife.  They can’t go and stand in queues, holding buckets in their paws, waiting patiently for water handouts.

And the Great Barrier Reef.  I just have to mention it briefly.  Our government’s spending millions of our dollars, fighting the crown of thorns, helping farmers limit run-off.  These are great and needed initiatives, but it’s all for nothing if the oceans continue to warm and continue to become more acidic.

Last year my husband and I applied for a grant from Reef Catchments and on December 18th with the help of others planted 500 native trees on our farm to limit erosion and run-off into the reef.  And we’ve been planting more since, and we’ll continue to plant them.  We’ve also spent over $10,000 of our own money, on erosion control and planting grasses.  We’re buying the more expensive organic chemicals.  Not using residuals.  My husband’s working long hours mechanically removing weeds.  We’re doing our little bit on our little patch, but it will be for nothing if we don’t stop contributing to the oceans warming and becoming more acidic.

The science is in.  There is no debate.  And if we don’t address this, all the rest is a temporary band-aid.  We need to stop contributing to global warming and start investing in 21st Century clean energy.  It’s good for jobs too.  Let’s protect the 70,000 plus jobs that currently depend on the reef instead of a relatively few jobs to be gained by an almost fully automated mine.  And all mines are heading that way, despite their “We want to provide you jobs” jingle. 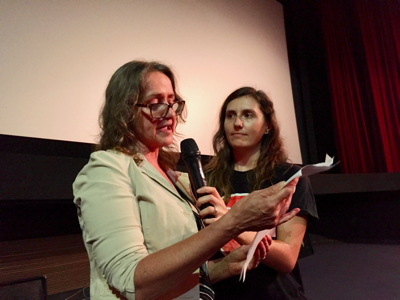 It’s way past time our government started to represent the interests of the Australian people over the interests of the resource extractors.  It’s time they started protecting our water, and investing in 21st century clean energy.  It’s being done successfully in other countries, countries with far less sunlight and space.  And the science is in.  Will it be goodbye Galilee Basin, goodbye farmers and small communities, goodbye natural springs for our wildlife?  And goodbye to a whole lot more?

Thank you, for your time.

The Mackay Conservation Group would like to thank Michelle for sharing her story and spreading important information about the threats of Adani's Carmichael mine. Michelle and her husband Viv's ongoing support for the group and the #StopAdani campaign is testament to their passion for protecting the planet.