“Right now, Adani are under investigation for drilling bores without permission at their mine site. They are in court facing charges for coal spill pollution, and they have been fined for polluting sensitive wetlands next to their coal port.

“With almost 60 per cent of Queensland still in drought, we can’t afford to put at risk the water that so many livelihoods rely upon”. 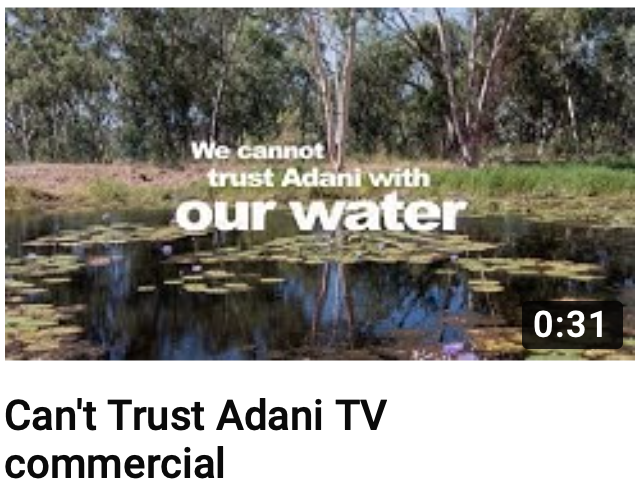 Len Thompson, a Mackay cane farmer said, "I know how important water is for our food security.  Farmers rely on underground water, particularly in times of drought, and Adani is putting all this at risk.

"There’s no bandaid that can be used to fix these precious water supplies once they're damaged. With Adani's track record there's cause to be worried.  We can't afford the livelihoods of farmers to wash down the drain.

Polling in Herbert, Dawson and Capricornia has revealed more than two thirds of residents support further scientific research to protect water resources before Adani’s mine is allowed to proceed.  Furthermore, across all three electorates, due to the drought, a clear majority support the cancellation of Adani’s water licences to safeguard Queensland’s water resources.

The Defend our Water Campaign Not One Drop for Adani was launched in February 2019 to draw attention to Adani’s plans to extract billions of litres of water from our rivers and underground reservoirs every year to run their mega coal mine - threatening the livelihoods of farmers and regional communities who rely on water to survive. Since then the campaign has been active in Central Queensland organising community forums, door-knocking, street marches, stalls and MP meetings. Groups involved in the Defend Our Water campaign include Mackay Conservation Group, Lock the Gate, Reef Action Whitsunday, Stop Adani Townsville, 350.org Central Queensland, North Queensland Conservation Council, Australian Religious Response to Climate Change.