As Category 4 Cyclone Debbie approached the Queensland coast in late March 2017, community members were racing to secure their homes and families. Meanwhile, Adani was racing to secure an increase in its licence to pollute. Adani’s Environmental Authority allowed the company to release pollutants into the environment at concentrations up to 30mg/L, but the documents released under RTI laws show Adani knew the concentration of contaminants in water stored on site greatly exceeded that value.

At 6.13pm on 27 March 2018, Adani was issued a Temporary Emissions Licence (TEL) by the Queensland Department of Environment and Heritage Protection (DEHP) at its Abbot Point Coal Terminal. The TEL enabled Adani to legally release suspended solids at a concentration of up to 100mg/L from a single location (W1) into the surrounding Caley Valley Wetlands environment. After the cyclone hit, Adani made an additional request to retrospectively amend this TEL, and at 6.37pm on 28 March, nearly six hours after Cyclone Debbie made landfall, the department issued an amended TEL to enable increased pollution from a second location (W2) directly towards the Great Barrier Reef World Heritage Area. See the map below 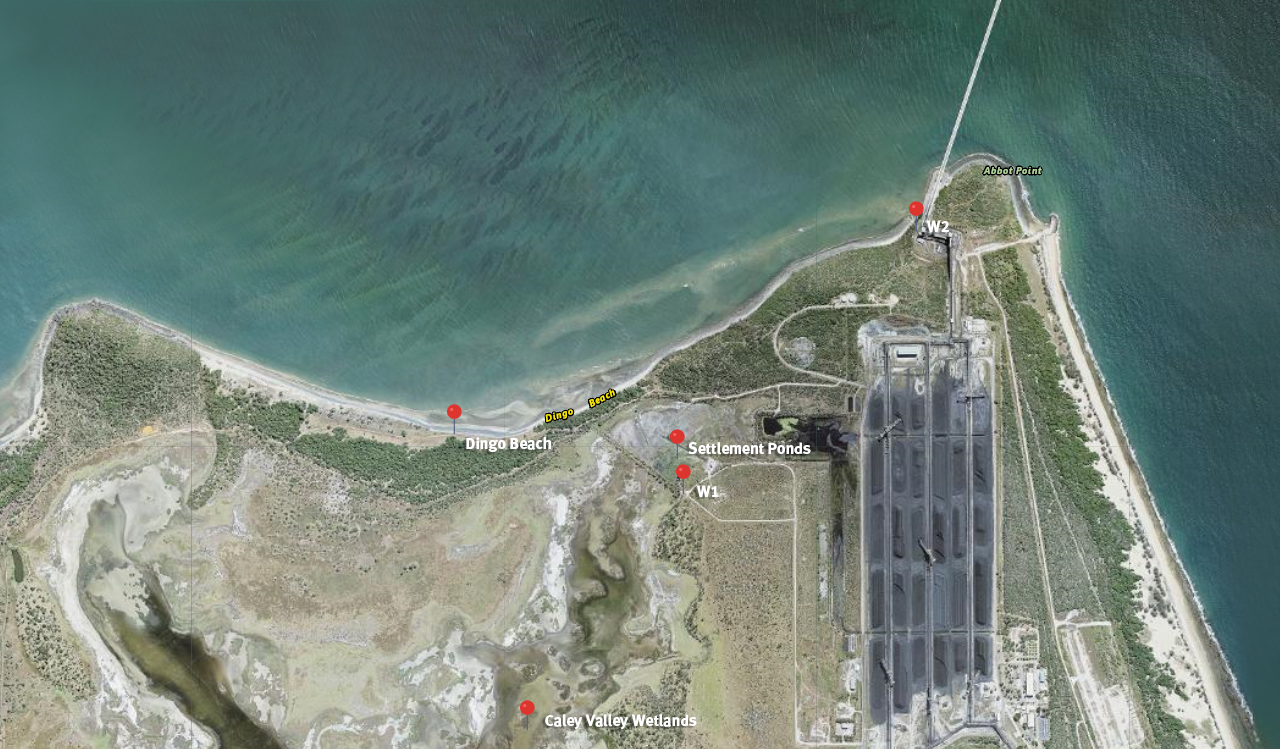 Several days after the cyclone, Adani sampled water at release point W1 (into the wetlands) and found that the concentration of pollutants was within the limit imposed by the TEL, however, no water samples were captured during the cyclone, so it is unclear what pollution occurred at the time. At release point W2 (into the Reef coast), Adani had installed rising stage sampling equipment that captured water as the discharge depth increased during the cyclone. Those samples showed that the concentration of sediment was 806mg/L, more than eight times the temporary limit.  It is unknown whether or not that sampling technique captured the highest concentrations that were actually discharged. There was also no monitoring of the total volume of contaminated water discharged. 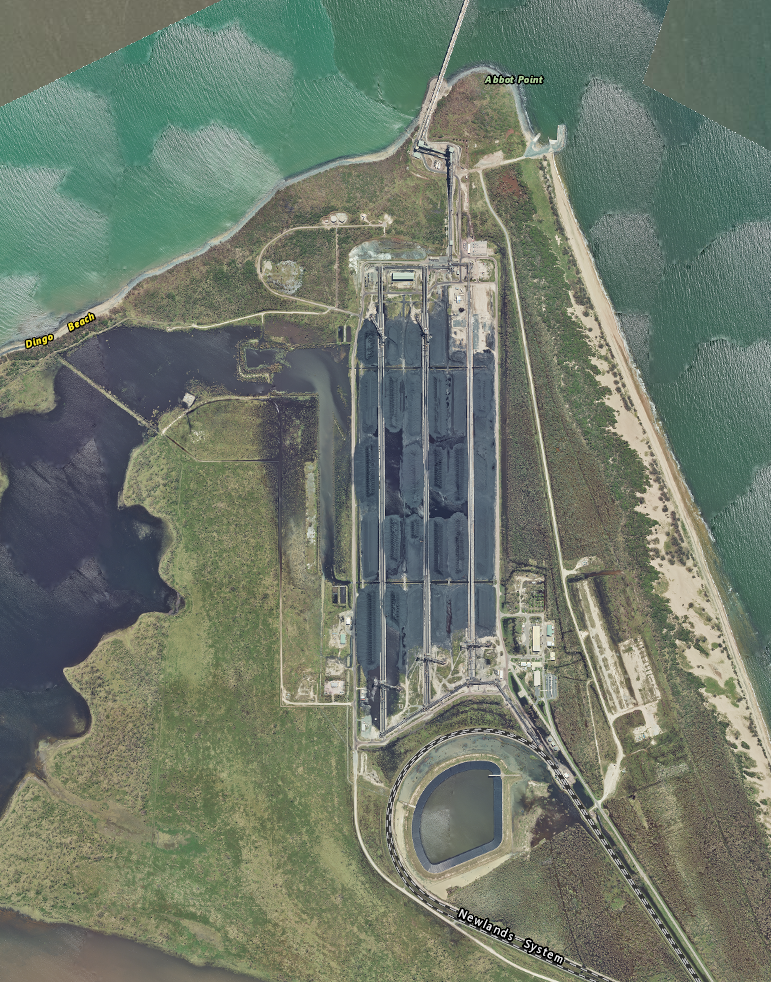 Cyclone Debbie made landfall at approximately midday on 28 March 2017.  Four days later (1 April 2017) aerial photography was captured at Abbot Point that showed coal had flowed from the port’s stockpiles towards the Caley Valley Wetlands. Mackay Conservation Group notified the Queensland Environment Minister of this imagery on 9 April 2017 and requested details on how the wetlands would be rehabilitated and what prosecutions would be forthcoming.

Subsequently DEHP issued a media release that said Adani had advised the department of non-compliance with its TEL and warned that the company could face a fine of up to $3.8 million for an intentional breach of their licence. Ultimately, Adani was issued with a Penalty Infringement Notice (PIN) of $12,190 for this breach. Adani has challenged this penalty. During investigations it was alleged that Adani submitted an altered laboratory report.

Adani has also lodged an appeal in the Planning and Environment Court against the Queensland Environment Department’s decision to require that they carry out an environmental investigation as a result of the discharge into the Caley Valley Wetlands at Abbot Point, to look at the causes and impacts. The court has ordered mediation.

In April 2017, Mackay Conservation Group (MCG) submitted a right to information request regarding the decision-making process around the issuing of Adani’s TEL. The Department of Environment & Heritage Protection eventually agreed to release all the documents to MCG, apart from information identifying individuals.

Adani, in contrast, challenged the RTI. The company sought internal and external reviews of DEHP’s decision to release the documents to MCG. Adani wanted the Department to withhold five segments of information contained on four pages. Adani claimed that the release of the information would lead to intense public scrutiny and prejudice legal action against it. It claimed the Labor government was improperly colluding with the environment movement, influencing the government’s decisions about the company, and that the release of the information would prejudice the Department’s dealings with Adani.

“I consider these expectations to be merely speculative or merely possible, rather than expectations for which real and substantial grounds exist” and

“I am unable to identify how disclosure under the RTI Act of the Information in Issue (which is not directly relevant to the issues in dispute) could give rise to a reasonable expectation that the Department or a court, in their decision-making processes, will somehow deny the applicant procedural fairness, thereby impeding the administration of justice.”

Adani ultimately decided not appeal the Information Commissioner’s decision and the documents were released to MCG.

Part of the information that Adani had sought to have suppressed included the highlighted words in this sentence:

“Releases from this location are small in volume however the TSS is always greater than 30mg/L (approx between 500+ to 900 from memory!) as this location is actually a sump and prior to any treatment process (a historical legacy discharge location).”

We now know that Adani was aware that the concentration of contaminants in the water that may be released from the site into the World Heritage Area was in the range of 500 to 900mg/L - well over the 100mg/L allowed by the TEL, which is consistent with the observation of 806mg/L in the limited samples collected during the cyclone.

The community has been assured that Adani has had the strictest environmental conditions of all time imposed on it yet Adani has failed to put in place any of the necessary processes or infrastructure to prevent a serious breach of its environmental authority at Abbot Point. The requirements to monitor discharge into both the marine environment and wetlands are also inadequate to properly determine the potential for environmental contamination and harm.

Adani recently lodged an application to the Queensland government seeking to increase the amount of coal going through their existing Abbot Point Terminal 1 facility by 10 million tonnes per annum (Mtpa) from 50 to 60 Mtpa (open to public comment until 10 August 2018), despite the threat of pollution from recurrent cyclones and no requirement on Adani to improve its facilities to withstand this threat.

Adani operates its port in a part of Australia that is frequently subject to severe weather. Over the past five decades, 23 tropical cyclones have passed within 100km of the port, including Cyclone Debbie in March 2018. See the track map below showing these previous cyclones. 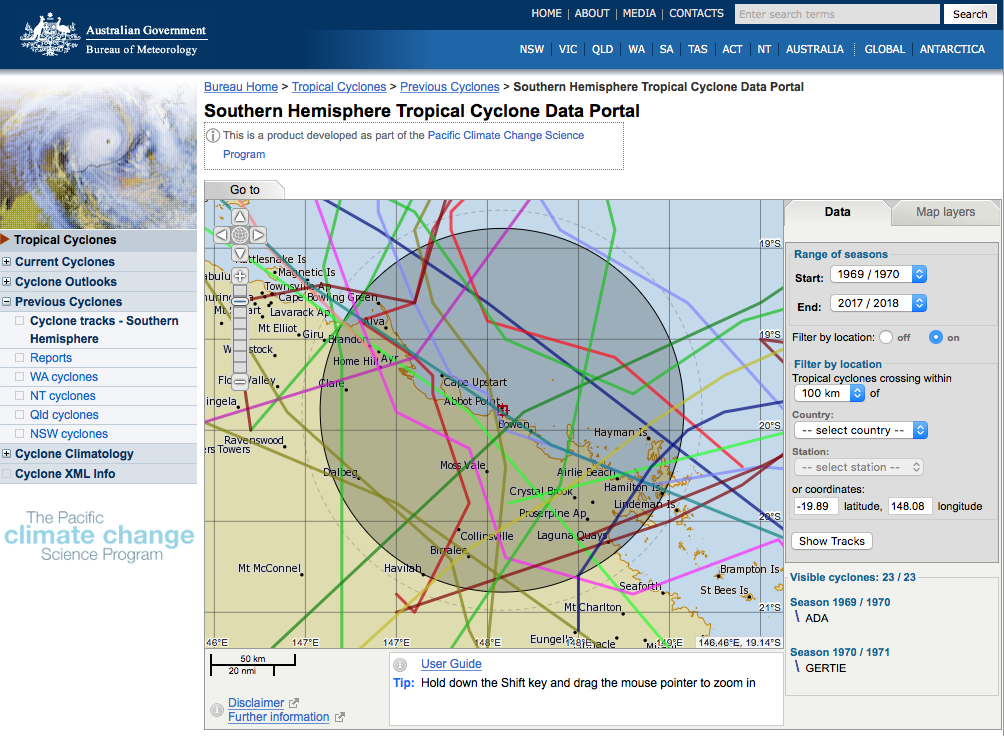 Adani should be prosecuted

Abbot Point port is within the Great Barrier Reef World Heritage Area which the Queensland Government has a special responsibility to manage in a way that protects its ecological values. It is now 16 months since the pollution event at Abbot Point and 15 months since the head of Queensland’s Environment Department said that Adani could face a fine of up to $3.8 million. Despite reasonable enquiries, we still have no evidence that the Queensland government intends to prosecute Adani over this serious breach of an environmental licence, releasing water polluted by coal into the Reef waters at W2. To date, the company has been issued with a paltry $12,190 fine that amounts to less than 0.005% of its 2016/2017 annual revenue at Abbot Point.

Background to MCG’s involvement in this issue