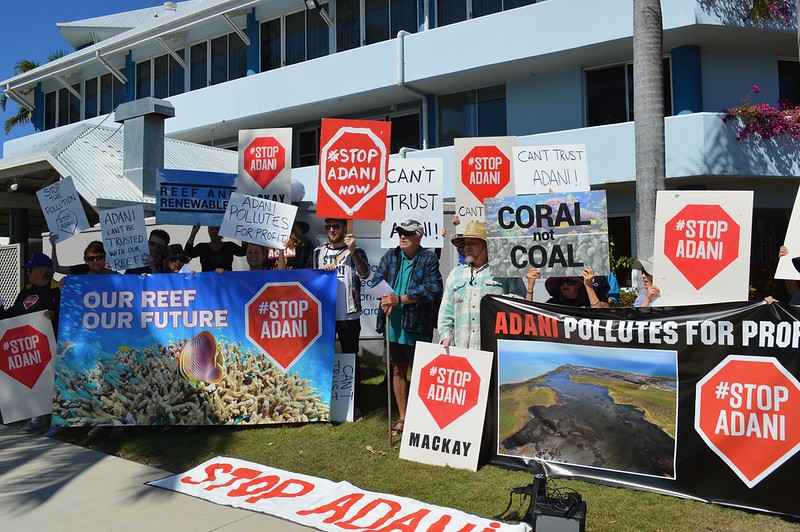 Mackay Conservation Group has been strongly opposed to the opening of the Galilee Basin and the Adani Carmichael Coal and Rail Project for over 10 years. The permit that Adani (also known as Bravus) has allows them to build what would be the biggest coal mine in Australia, and one of the biggest coal mines in the world.

Why do we oppose the Adani Carmichael Coal Mine?

If built, Adani’s Carmichael coal mine will:

Critically, if allowed to go ahead, Adani’s Carmichael coal mine will unlock the Galilee Basin - one of the world's largest untouched coal reserves - paving the way for at least eight more coal mines to be built. All at a time when scientists are warning we can't build any more fossil fuel infrastructure if we want to avoid catastrophic global heating.


More information on why we must #StopAdani


The Adani company is engaging in unethical processes as they displace indigenous people and destroy irreplaceable lands in Australia and India.

The Adani Carmichael Coal and Rail Project is destroying  the sacred lands, waters and cultural heritage of the Wangan and Jagalingou people. Find more information on this through the following links:

India:  Adani Power Vs The People Of Jharkhand   and    https://www.stopadani.com/godda

The Adani company has been known for its unethical corporate behaviour and reckless destruction of the environment both overseas and in Australia.

These breaches include clearing koala habitat without a wildlife spotter, unlawful clearing of wildlife habitat, misleading the Queensland Government, and releasing coal laden stormwater at its Abbot Point coal terminal by the Great Barrier Reef and Caley Valley Wetlands twice.

This is a concerning pattern of Adani behaving as if they are above the law. If Adani can not follow the rules, they should not be allowed to operate.

The Adani coal mine is a carbon bomb.

Adani has a permit to dig 60mtpa of thermal coal. An Adani CEO was caught on camera saying they will massively scale up once it gets going. The coal burned will negatively impact the whole world, including by increasing natural disasters such as the recent unprecedented bushfires, record-breaking heat waves killing vulnerable people worldwide, and the bleaching of the Great Barrier Reef. It is morally wrong to knowingly increase this climate disaster. What’s worse, is that if the Adani mine goes ahead, more will follow in the Galilee Basin. If the Galilee Basin coal is burnt,  it would create as much emissions as a whole extra country.

Our water supply is under threat from the Adani mine.

We can’t live without water. Adani has been granted unlimited groundwater, and they also have permits for a huge amount of river water. Adani would mine under the edge of the Great Artesian Basin. The permits they have were issued against the advice of scientists.

Farmers' bores are at risk of drying up and the ancient Doongmabulla springs  could be ruined forever.

Our rivers are already suffering as a result of the construction of the project. In February 2021, Mackay Conservation Group and Environmental Justice Australia made an official complaint regarding sediment pollution from construction sites along the rail line, leading to ongoing investigations by the Queensland Coordinator-General.

Adani’s mine will likely drive some of our rare birds and animals to extinction.

The southern black throated finch, yakka skink and ornamental snake are particularly at risk of extinction due to the project, and many vulnerable animals inhabit the area including koalas. Extinction is forever.

In 2015, Mackay Conservation Group succeeded in having the Commonwealth Environment Minister’s approval of the mine set aside by consent.No judgment was delivered but the Court later issued a statement that the parties agreed the Commonwealth Environment Minister had failed to consider approved conservation advices for two listed threatened species,  the Yakka Skink and the Ornamental Snake, contrary to the requirements of section 139(2) of the EPBC Act.

Despite the terrible threats to wildlife, Adani was later granted approvals for the mine.

It is estimated that an extra 520 more coal ships could be passing through the Great Barrier Reef each year if the Adani project goes ahead.

The reef is a delicate ecosystem and a natural wonder. Many of us also depend on it for food, tourism jobs, and to protect our coastline. Hundreds more coal ships travelling through the reef per year significantly increases the level of pollution that the ecosystem is exposed to. We know coal dust is harmful to humans, flora and fauna, including coral. The Adani mine also puts the reef at peril through increasing climate change and water pollution.

Mining and combustion of coal are significant sources of fine particle pollution, which contributes to heart disease, lung disease and lung cancer.

Air pollution will be a significant risk associated with coal transport at the Australian port terminal and along the rail corridor.

Concerned doctors have written about the health risks of the Adani mine.

The Carmichael mine is being aided with subsidies from the Government in Australia and India.

Adani avoids paying tax and has a complex web of companies to juggle money around in. Adani has also been known for not paying their bills.

Jobs that have been promised are costing us other mining jobs.

People Power is working, but we need everyone.

There are thousands of people who feel so strongly against this Adani Carmichael coal mine, that they will not let the project continue. We will keep fighting against it until it stops.  The Stop Adani movement is having a significant impact on the global effort for climate action, with many companies and financiers agreeing to stop working with Adani and some agreeing to stop supporting coal altogether as a result of the Stop Adani campaign. In Central Queensland, we are amplifying local voices and exposing the local environmental impacts of the mine.

Many people from all walks of life including Traditional Owners, farmers, reef tourism operators, parents, birdwatchers, doctors, engineers, students, churches, fisher people, unionists, and anyone who cares about protecting land, air, water and climate will keep on stopping Adani until they are stopped for good.

We will support other industries that won’t cost us the earth.

Some of the short documentaries that have been made about the #StopAdani movement include:

Guarding The Galilee with captions

People Power V Adani - The Fight Of Our Times 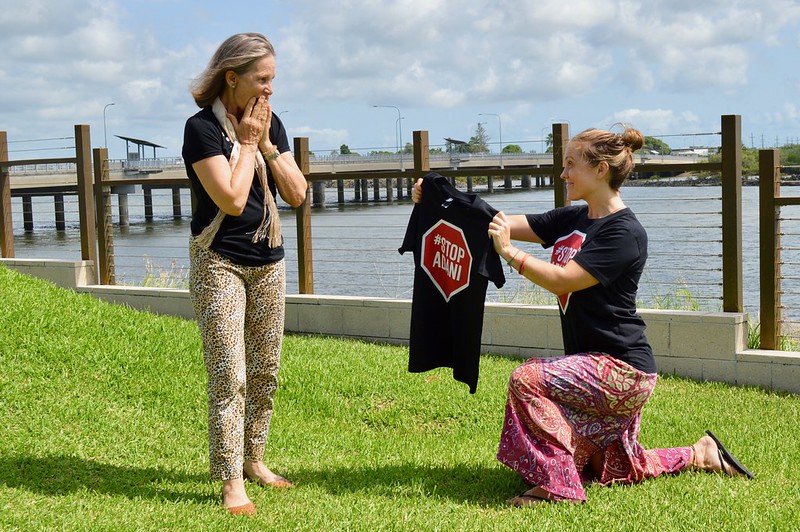 People Power is working, but we need everyone.  We have had a lot of wins to stop the Adani Carmichael coal mine and every single one has been possible because of our...
Read more

Due to insufficient Government resources allocated to the supervision of coal mines in fulfilling their environmental management obligations, Central Queensland residents are taking it upon themselves to monitor and expose environmental harm...
Read more