5 reason's why Adani's mine is bad news for Qld's water:

If built, Adani’s proposed mega-coal mine will be the largest in Australia and one of the largest in the world. The mine puts at risk water resources that are the lifeblood of Central Queensland. Rivers, ancient springs, and aquifers of the Great Artesian Basin (GAB) adjoining the mine are all vital in times of drought and will be impacted by Adani's mine.

The GAB is our greatest inland water resource covering 22% of Australia. Sometimes the Basin expels water from deep underground up to the surface, in the form of natural springs. These springs provide reliable water in times of drought for rural communities and farmers. They also support remarkable ecosystems, like the Doongmabulla Springs which is under threat from the mine.

Adani will not be charged for the groundwater they take during mining[1], and the Qld government has removed the rights of the community to object to the granting of water licences to Adani.

Impact of the Carmichael mine on Ancient Springs 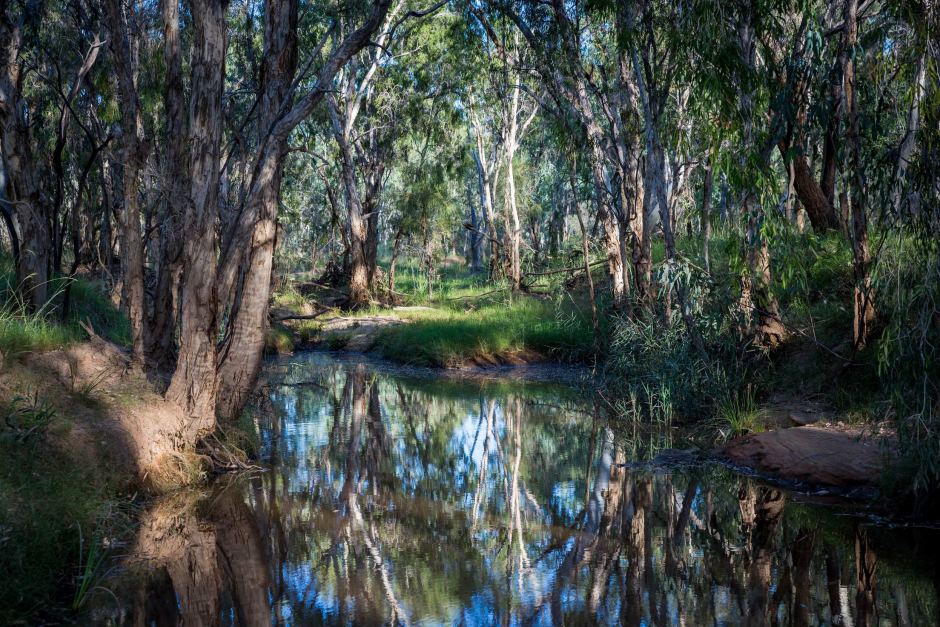 The Doongmabulla Springs complex is a system of 160 separate wetlands which act as rich and ancient oases in a very dry landscape[2], located just to the west of the proposed mine. The springs have exceptional ecological values[3]. They are home to 56 endemic species, including a number of threatened species, and they act as a unique drought refuge in a very dry landscape[4].

They also have exceptional cultural significance to the Wangan and Jagalingou people[5] who continue to fight for their right to say no to Adani's mine.

These springs are dependent on groundwater and could be impacted by Adani’s plans to extract groundwater. Water experts have recently raised concerns that the mine could cause these springs to dry up permanently[6][7][8].

Impact of mine on groundwater

The Associated Water Licence granted to Adani by the Qld Government does not place a limit on how much groundwater can be extracted[9]. However, it is restricted to only taking water that is used in association with mining activities. Although the volume of water that will be taken is still uncertain, the company estimates that the Carmichael coal mine will extract an average of 4.7 billion litres per year[10] which equates to 270 billion litres over the life of the mine.

The license does not provide any thresholds to halt the mine if its impacts on groundwater are too severe and has been granted for 60 years. There are no independent review processes available. Legal avenues for communities to object to the grant of the licence were removed during a midnight sitting of the Queensland Parliament in 2016, the night when all eyes were on the USA during Donald Trump's election to presidency.

The scale of the impact on both the GAB and the Doongmabulla Springs are highly uncertain. Risks to both hinge on the extent of connectivity between the coal beds and GAB formations, which depends on the integrity of the base of the GAB, a layer known as the Rewan Formation. 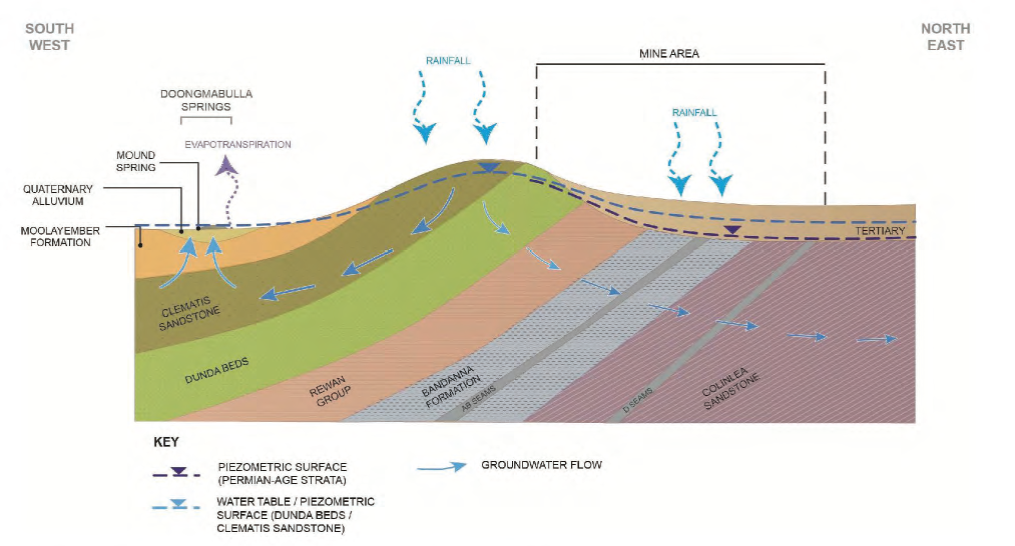 Little is known about the Rewan Formation, and the federal government’s Independent Expert Scientific Committee on Coal Seam Gas and Large Coal Mining Development (IESC) has raised major concerns that underground longwall mining planned by Adani may cause subsidence which could fracture the Rewan Formation and allow for substantial GAB drainage[11].

Once the mine closes 6 vast open cut pits, up to 200 metres deep, will be left behind. These will act as permanent sinks for groundwater. Adani itself estimates that over 800 million litres of groundwater will flow into these open pits each year, every year, for the rest of time.[12].

The mine will also put at risk the Mellaluka Springs Complex and an important water-dependent threatened species, the Waxy Cabbage Palm[13].

Impact of mine on rivers

The groundwater take by Adani will lead to a loss of river flow in the Carmichael River, because it will reduce the amount of water that joins the river from underground[14]. The Queensland government is also allowing the Adani mine to discharge significant volumes of mine affected wastewater into the Carmichael River[15]. On top of that, Adani has been given a licence to take up to 12,500 million litres each year from the Suttor River[16]. Though Adani are required to pay for water taken from the Suttor River [17] the community was not given any opportunity to object to the grant of those licences. 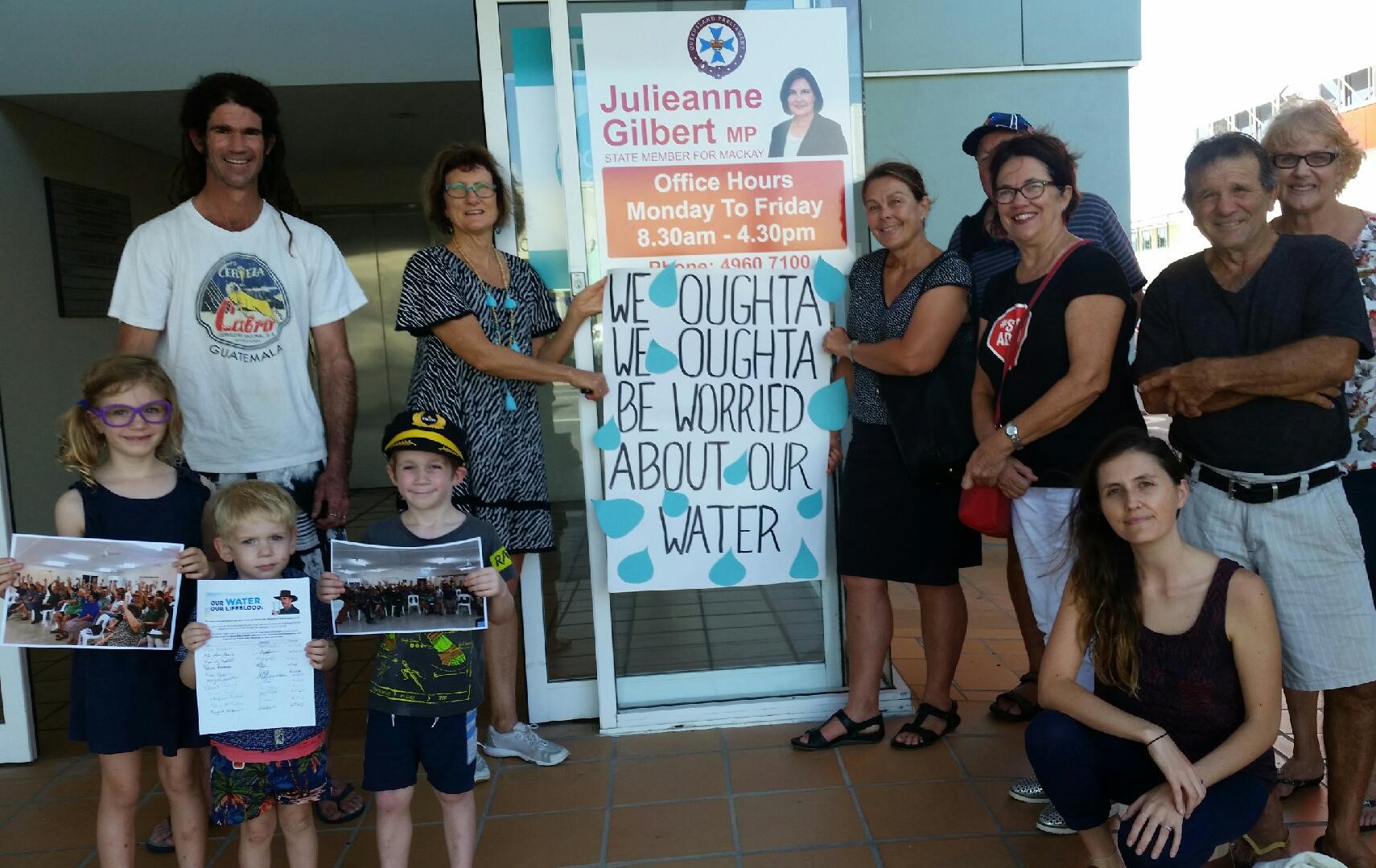 Diving deeper into the details of Adani's water licence, and the manner in which is was granted, highlights the importance of standing up on this issue.

The Adani Carmichael mine was approved on the basis of a deeply flawed assessment, most notably its’ modelling of how the mine will impact on groundwater. Though the mine has been given Federal government approval, there are still a number of important water-related research and management plans required by the Federal approval that are yet to be completed[18].

That's why we need to make it loud ad clear to our State and Federal Governments that they need to actin the interest of regional communities and protect the precious water resources that they rely on.

Make sure you sign the pledge and call or write to your local State MP asking them whether they will stand up for our water and our lifeblood.

... and it's not just Adani's Carmichael mine that threatens Qld's water.

The Carmichael mine is the key to opening up the Galilee Basin to a swarm of other mining giants. There are 9 proposed coal mines in the Galilee Basin. To date 5 of those have been approved without adequate information to assess their full impacts on groundwater and other water resources, and without considering the combined impacts of the operation of all these mines together.

Previous analysis shows that up to 2,007 billion litres of groundwater could be lost as a result of water being pumped out or drained by the nine proposed coal mines in the Basin[19] - almost double the volume of water in Wivenhoe Dam.

The IESC has found that mine assessments were, in most cases, poorly undertaken with inadequate data used to determine impacts on issues such as surface water quantity and quality and groundwater quantity and flows.

The Bioregional Assessment being undertaken by the Federal Government for the Lake Eyre bioregion (which includes the Galilee Basin subregion) is designed to better assess the cumulative impacts of mining on water resources in the Galilee Basin.  However, it has not yet been finalised, despite some preliminary reports having been completed.

Queensland Labor committed to “a detailed scientific study into the full cumulative water balance impact of the proposed coal mines in the Galilee Basin” in the lead-up to the 2015 election[20]. However, despite this being crucial to properly assess the full risks to water resources from Carmichael and other mines, Labor did not deliver this study in their last term of government.

[8] Independent Expert Scientific Committee Advice on the Carmichael Coal Mine

[10] Adani 2016. Supporting Document for Application for Mine Dewatering under the Water Act 2000: Carmichael Coal Mine. P11

[11] Independent Expert Scientific Committee Advice on the Carmichael Coal Mine

[12] Carmichael Coal Mine and Rail Project SEIS (Nov 2013) Mine Hydrogeology Report, Appendix K1, gives daily figures for inflows which we have converted to annual inflows. Page 108.  NB Inflows during the life of the mine may be even larger for some voids, because partial refilling is not planned to commence for a number of decades.