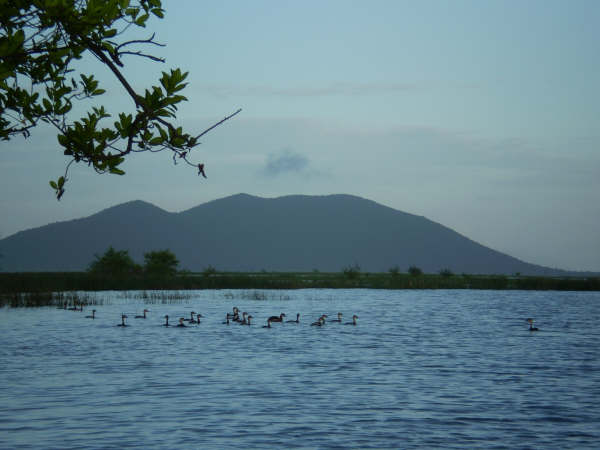 One of the most beautiful and largest coastal Wetland in Queensland is in real danger of permanent damage as a result of the expansion of the Abbot Point Coal Ports, associated rail links and industrial development in the adjacent Abbot Point State Development Area.

The 5,154 hectare Caley (Kaili) Valley Wetlands are beautiful – alive with extraordinary bird life that can number over 40,000 in the Wet Season from October through April.

Of the 200+ known species of birds that frequent the Wetlands, 3 are listed as threatened, including a nationally important population of the vulnerable Australian Painted Snipe. 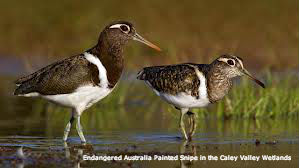 The Caley wetland contains the largest known habitat for this species in Australia. It is threatened by a coal conveyor belt for the AP-X coal terminals project which would go across the western end of the wetland.

Along with cormorants and many other wetland birds, black swans nest in Saltwater Creek that brings summer flows of freshwater into the Wetlands from overflow of the Don River to the east.

This wetland is the most northern site that this species nests in Australia. Unfortunately they need to bring their young across the Abbot Point port’s access road into the wetland a few weeks after birth and sometimes families are run over and killed.

The white-bellied sea eagle nests in the area proposed to become another enormous coal stockpile.

The endangered black-throated finch is in these wetlands as well as the Bowen and Galilee Basins.

Migratory shorebirds that travel from the Arctic Circle to Australia’s coastal wetland estuaries arrive in October and need quiet undisturbed places to build up reserves for the return journey in April.

Caley Valley waterways are a carpet of lilac waterlilies, alive with dragon flies and honey eaters, bounded by swamp gums and paperbarks.

The rugged Mount Luce sits along the coast and to the south is the looming Mount Roundback, the first of a series of hills and mountains that form over 500 sq.km of the catchment that feeds voluminous rainwater runoff to the wetlands

This paradise is the place GVK/Hancock/Aurizon and Adani coal and other mining companies want to invade with a monster rail loop for their new coal terminals.

And directly north and northeast of the Wetlands is the Abbot Point Coal Port, with expansion plans that would see it grow 5 times larger.

The Wetlands represent one of the largest intact wetland systems between Townsville and Bowen and are tidally and ecologically interconnected with the Great Barrier Reef World Heritage Area.

The Wetlands are listed under the Directory of Important Wetlands in Australia (DIWA). They qualify as a Ramsar wetland and are internationally significant because they are habitat for so many wetland birds.

Adverse impacts on these wetlands from coal port activities affect outstanding universal values of the Great Barrier Reef as described in the protection agreement between the World Heritage Committee and the Australian government. 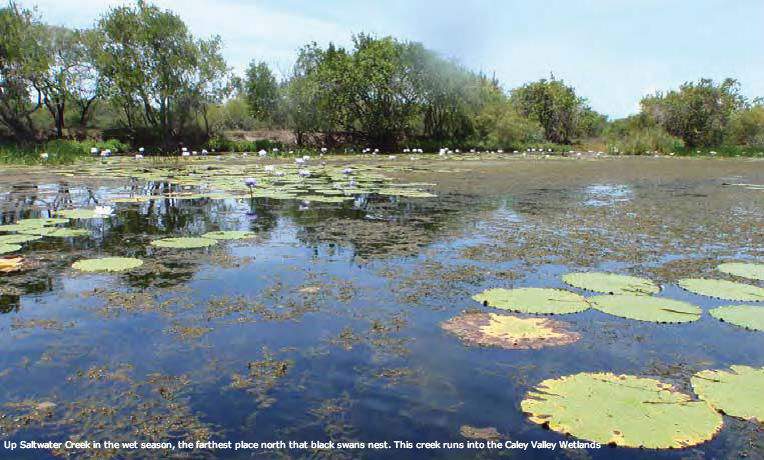 Mackay Conservation Group has been engaging with the Queensland government for the past decade to get appropriate protections for these wetlands in place.

They have been threatened by inappropriate development proposals such as the CHALCO aluminium refinery in the state declared Abbot Point State Development Area of 16,230 ha south of the Caley Valley wetlands.

The CHALCO project would have threatened the wetlands and the offshore Great Barrier Reef with contamination from highly corrosive alkaline wastewaters with a pH of 13 compared to the pH of 7 of the wetlands.

After much lobbying by MCG the Queensland government produced a draft Environmental Management Plan for the wetlands.

The consultant’s report stated that the highest risk to the wetlands was contamination from industrial and port development.

The area is subject to heavy flooding and storm surge and a combined event, likely in the cyclone season, would risk contamination of the wetlands, as would failure of the new onsite dam or the coal wastewater containment levees. Failure of the levees has happened in the past.

There is no legislation in Australia or Queensland that specifically protects wildlife health from such pollution.

Another consultant’s report for the state development area also reported chronic low level contamination from polluted water leaking below the current coal stockpiles into the groundwater below and out to the Great Barrier Reef waters.

The Australian government now requires a Management Plan for these wetlands but to date neither the state nor federal levels of government have produced one.

Approvals for coal terminals are being given allowing offsets (to date they are small payments to the Great Barrier Reef Marine Park Authority (GBRMPA) for the destruction of environmental values so that the port can expand in an area clearly unsuited to more development.

There is no science to demonstrate that using offsets will prevent a net loss of environmental values yet they are now official Queensland and Australian government policy to enable development in inappropriate areas “where there is no alternative”.